Country of finance: US
Nationality of director: US
Location of story: Boston
Filming location: Boston and other towns in Massachusetts.

Did you watch the Matrix films and wonder why no-one had an other-gender body inside the Matrix?  This film does not leave that aspect unexplored.

Instead of a virtual reality Matrix, most people in this film have a surrogate that is a younger, better looking version of themselves.  They send the surrogate out to work and play, and they themselves stay at home in a high-tech chair that allows them to see, hear and feel whatever happened to the surrogate.

A young woman in a skimpy dress is murdered at the beginning of the film.  The surrogate cops, Greer and Peters chase up her operator, and find an overweight middle-aged man.  An attractive young black man is shown by his ID card to be really a middle-aged white man. 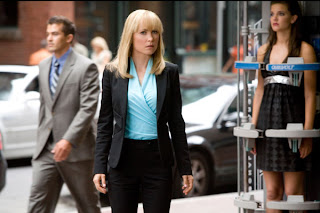 To put it simply:  The Bruce Willis character save the world while in this body.

In conclusion: a middlebrow sex-transfer fantasy for those who do fantasize other-gender bodies, but never actually do it in reality.    This aspect is generally not being mentioned in the reviews.