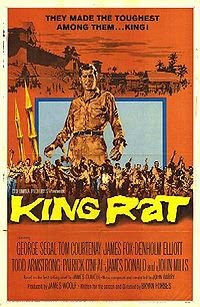 Marlowe, whom Clavell based on himself (Clavell was three years in the Japanese POW camp at Changi), is at first aloof from the US Corporal King, the leading black marketer in the camp, but is eventually drawn into his circle. This brings Marlow to to attention of Lieutenant Grey, the Provost Marshall of the camp who attempts to arrest both of them. The film is set in 1945 leading up to the end of the war.

There is an extra minor character in the novel.

Sean Jennison was with Marlowe in the same RAF squadron in Java. As a fighter pilot he had shot down three Japanese Zeroes. He was then himself shot down and captured.

The commanding officers within the POW camp selected Sean to play female parts in the camp theatricals because he was one of the youngest men present and because he shaved only infrequently. Sean fought this assignment quite bitterly, but the order was repeated. We “tried to sooth Sean down, but he swore he was going to be the worst actress in the world, that he was going to make sure that he was sacked after the first disastrous performance. We told him that we couldn't care less. His first performance was terrible. But after that he didn't seem to hate it so much. To his surprise, he even seemed to like it. So we really started to work.

It was good having something to do - it took your mind off the stinking food and stinking camp. We taught him how a woman talks and walks and sits and smokes and drinks and dresses and even thinks. Then to keep him in the mood, we began to play make-believe. Whenever we were in the theatre, we'd get up when he came in, help him into a chair, you know, treat him like a real woman. It was exciting at first, trying to keep up the illusion, making sure that Sean was never seen dressing or undressing, making sure his costumes were always concealing but just suggestive enough. We even got special permission for him to have a room of his own. With his own shower.

“Then suddenly, he didn't need coaching any more. He was as complete a woman on the stage as it was possible to be.

“But little by little, the woman began to dominate him off stage too, only we didn't notice it. By this time Sean had grown his hair quite long - the wigs we had were no damn good. Then Sean started to wear a woman's clothes all the time. One night someone tried to rape him.

“After that Sean nearly went out of his mind. He tried to crush the woman in him but couldn't. then he tried to commit suicide. Of course it was hushed up. But that didn't help Sean, it made things worse and he cursed us for saving him.

“A few months later there was another rape attempt. After that Sean buried his male self completely. ‘I'm not fighting it any more,’ he said. ‘You wanted me to be a woman, now they believe I am one. All right. I'll be one. Inside I feel that I am one, so there's no need to pretend any more. I am a woman, and I'm going to be treated like one.”

Sean continued to have identity crises. He was, after all, the only only non-male in a very artificial environment. He could talk to the other actors, but no-one else was in a situation like his. He was so effective on stage that he became the lust object for the camp. Whilst he was the only prisoner to have a room to himself, he could never sleep in it because of the risk of rape.

King Rat was filmed in 1965. The Sean Jennison episodes were in the script from the beginning, but at a late stage, Columbia Pictures executives finally realized that they were present, and Sean was completely removed from the film.

In Hollywood ‘buddy’ films there is often a possibility of reading of reading the relationship between the two leading males as homoerotic. A common diversion from this reading is to have an obvious queer character, often a trans person of some kind. The classic film of this kind is Freebie and the Bean, 1974, where cops James Caan and Alan Arkin go on at each other like a married couple. The diversion is provided by a trans criminal – without the courtesy of a name – who is beaten up and killed by James Caan in the ladies’ room. The relationship between Marlowe and King could of course be taken as homoerotic. Perhaps in 1965, upper management was simply homophobic, without the understanding of the diversions that would become common a few years later.

Given the surname Jennison, Clavell may have had some psychoanalytical theory in mind, but no such thoughts are presented or developed in the book.
__

Thanks for having this up - I was just remembering this character from the book, and am not surprised it wasn't in the movie. I think it's very important to keep these historical accounts of perceived gender/gay issues in the recordbooks to help future generations understand bizarre social policies that do not appear based in reality.

The character of 'SEAN JENNISON' in 'King Rat'the novel may very well be based on one BOBBY SPONG.

SPONG was an enlisted soldier in the British Army who appeared, in exclusively female roles, in theatre productions at Changi camp. It is suggested that Bobby Spong may have adopted a feminine persona even off-stage...

"These two young men, slinkily dressed and well made-up, caused immeasurable
happiness to thousands of prisoners. They were frankly adored. In POW camp we had no heroes: no war heroes, political heroes, sport heroes. The only people about whom there was any glamour were the actors and most idolised of these were the female impersonators. Crowds escorted them from stage door to their barracks each evening. I often heard troops say, “If Gloria were a woman I could really go for her,” and others, “I had a wonderful dream about Bobby Spong last
night.”

(The other performer is Lance Bombardier Arthur Butler. He had been well known in Singapore before the war as a female impersonator named “Gloria d’Earie.” With his “delightful tenor voice,” he sang on Singapore Radio every Sunday and at society birthday parties, and he even gave a command performance for thesultan of Johor.

“Butler was slim and gracious, with small features and ardent brown eyes,” wrote Tom Wade. “He was always known as Gloria and the jokes about him were almost as numerous as they once use[d] to be about Mae West. It was said that when he gave an order to the gunmen in his artillery battery, they would always reply, “Yes, darling.”


Bobby Spong survived his period of captivity. Assigned a troop-ship to return him to his native Britain in '45, the ship encountered a tropical storm on the journey home. It sank with all lives lost.

This character and passage from the book always haunted me...and decades later, I finally transitioned, blossoming into the woman I was destined to me.

The little bits about gender variance and transsexuality I read in novels and sci-fi short stories touched my soul and gave me the eventual courage to be me.