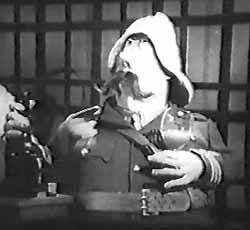 Major Bloodnok, late of the 3rd Disgusting Fusiliers, OBE, was a character voiced by Peter Sellers in The Goon Show.

In 1972's The Last Goon Show of All, Major Denis has an arrangement with Gladys, a rather deep-voiced mistress of Discipline.


In the Goon Show Scripts published by Spike Milligan in the 1970s we are told more of Bloodnok's past.  After he was cashiered from the army having been found cross-dressed, he re-enlisted as Florence Bloodnok and served a year in the women’s ATS, at one point having to report a sailor for trying to interfere with her in an air-raid shelter. 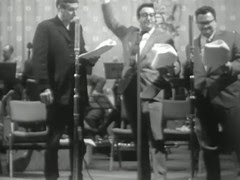