As part of a experiment to meet the demand by Stalin that the Soviet Union have more soldiers, Evdokiia Kuznetsova is taken from the gulag and is transformed into a man, Evdokim. He then becomes a Stakhanovite building the Moscow underground in the 1930s, marries a female fellow worker, and adopts a child, Dolores, who had been orphaned in the Spanish Civil War.

They became the models for Vera Mukhina's famous sculpture that adorned the 1937 Paris World's Fair and became the emblem of Mosfilm. The athletic male representing the Hammer (Heavy Industry). After posing for the statue, the Kuznetsovs became celebrities, living in luxury, Kuznetsov a member of the Supreme Soviet.

However Kuznetsov became angry and attacked Stalin. He was shot in the scuffle. Paralysed and unable to speak, Evdokim was turned into a hero once more: he had supposedly saved Stalin's life and was exhibited as a museum piece. His wife commanded his thoughts, and even wrote his book "Hammer and Sickle."

The End of the World

Episode 1.2 of Doctor Who

The Doctor takes Rose billions of years into the future to witness the end of the Earth as the Sun expands and destroys it.  Observation is from a space station, and the guests are the super-rich.  One of the guests is Cassandra, who has had 708 operations and is now just a stretched face.  She is described as the last Earthling (which of course ignores the two minions who move her frame and frequently moisturize her). 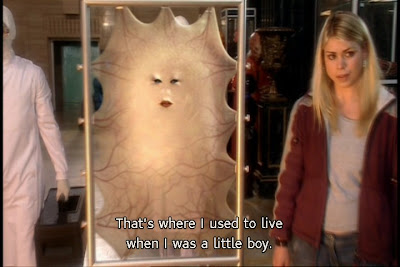 Cassandra is also the bad guy.  She releases robot insects which destroy the station's protections so that all will die and she will make a killing having bet against the other guests on the stock exchange.  She teleports out at the last minute, but is brought back by the Doctor.

Incidentally, Casandra who uses makeup and mentions various ex-husbands is obviously to be taken as female, started out as  boy.  This makes her one of the more rococo specimens of the old film favourite, the transy killer.

Zoë Wanamaker was unable to be in Cardiff when the episode was filmed.  Cassandra was originally voiced by Eve Myles, and Zo's voice added later.

Of course referring to this series as number 1 is high revisionism.  The original season 1 of Dr Who was back in 1963.
Posted by Zagria at 11:41 6 comments: