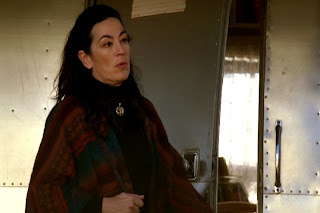 Sarah, chasing the image of three dots, goes to a UFO convention where she hears about a blogger, Abraham, who has written of the three dots.  She is approached by Eileen who says that she knows about Abraham.  Her trailer contains maps of sighting of Abraham and of UFOs.   At a restaurant, Sarah follows Eileen into the ladies room and demands that she must meet Abraham.  Eileen takes off her wig and confesses that she is Abraham.  Her real name is Alan Park, and as an MIT graduate was employed on a secret project with an unknown metal.  Park fearing for his life went into hiding and disguised as a woman so as not to be recognized.  Park never knew where he worked for he taken there each day in a closed van.  Sarah takes Park to a regression therapist to go over memories of noises etc.  She records the session, and although an assassin kills both Park and the therapist, Sarah is able to deduce the location of the plant.

This is the only episode of SCC directed by Félix Enríquez Alcalá.  He has directed episodes for a lot of television serials. 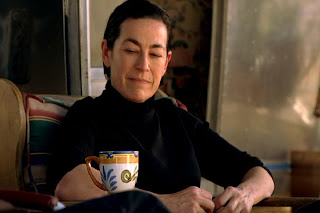 Dinah Lenney is in only this episode of SCC but is a regular as Nurse Shirley in ER, and has played small parts in many television series, almost all female parts.

A cross-dressing drama for the cis-gendered.   Passing in gender role creates problems of its own, extra problems that a person hiding from bad guys does not need.  How did Eileen rent a car without a drivers license in her female name?  The script avoids these problems.

This, probably the best known of Shakespeare’s Sonnets, is central to discussions of homosexuality in Shakespeare.  It is possibly addressed to a cross-dressed young man, or at least a young man with androgynous beauty.

'A woman's face, with Nature's own hand painted,
Hast thou, the master-mistress of my passion;
A woman's gentle heart, but not acquainted
With shifting change, as is false woman's fashion;
An eye more bright than theirs, less false in rolling,
Gilding the object whereupon it gazeth;
A man in hew all Hews in his controlling,
Which steals men's eyes, and women's souls amazeth.
And for a woman wert thou first created;
Till Nature, as she wrought thee, fell a-doting,
And by addition me of thee defeated,
By adding one thing to my purpose nothing.
But since she prickt thee out for women's pleasure,
Mine be thy love, and thy love's use their treasure.'

Proposed identifications of the young ‘master-mistress’ include Willie Hughes and Henry Wriothesley, to both of whom we will return.

Koolmatrie, an aboriginal Australian, was born to the Pitjantjatjara people but taken from her mother in 1950 and raised by white foster parents. She finally expressed herself in an aboriginal acting troop. Her 1994 autobiography, My Own Sweet Time, won the $5,000 Dobbie award for women’s life writing.

When she proposed a sequel to the book in 1997, the publisher insisted on meeting her, and it came out that she is the female persona of Leon Carmen (1950 - ) and John Bayley, two white men with a grudge that white men cannot get published. Carmen admitted that he had not ever met an aboriginal woman.

Here is a video retrospective of the Hot Peaches.

Many persons of interest passed through Hot Peaches, including Marsha P Johnson, Bette Bourne, International Chrysis, Hapi Phace and so on.

Marcello is a hack journalist chasing celebrities, religious stories and the local aristocracy.  He encounters Steiner, an established writer with a loving wife and children, and an attractive apartment, all that Marcello aspires to.  Later Steiner kills his children and commits suicide.

Marcello Mastroianni (1924 – 1996) acted in 143 films.  La Dolce Vita made him famous.  He was married to Flora Carabella from 1948 until his death.  He famously had an affair and a daughter with Catherine Deneuve.  He died of pancreatic cancer.  It is also rumoured that he was the young boyfriend of Giovanni Montini (1867 – 1978) whose stage name was Pope Paul VI.

Nico (Christa Päffgen 1938 – 1988), related to the Päffgen brewery in Cologne, went on to appear in the Morrisey-Warhol film Chelsea Girls and to sing with The Velvet Underground.  She died aged 40 after a minor heart attack while cycling.

Dominot continued as a female impersonator and performer and has his own club in Rome.

Steiner was based on the novelist Cesare Pavese(1908 – 1950) an anti-fascist and award-winning novelist who committed suicide.  Co-screenwriter Tullio Pinelli had gone to school with Pavese and felt that he had become burnt out.

The film divides into seven episodes, which reflects the seven hills of Rome, the seven sins, seven sacraments, seven days of creation etc.  See the Wikipedia article for details.

The film opens with a parousia, an arrival of Jesus as a statue carried by a helicopter.  It ends with a parousia of the sea monster that can still look at you after being dead for three days (the fish symbolism of Jesus is hinted at here).  Both the opening and the ending have a non-communication because of distance or of noise.   Thus like Mark’s gospel the end reflects the beginning.  Click here for an essay by David Ulansey comparing the beginning and end of Mark’s gospel.

The centre of Mark’s gospel is the transfiguration where Jesus goes up a mountain to gain an epiphany.  At the centre of La Dolce Vita Marcello goes up to Steiner’s apartment and finds that what he believed in does not exist.  Steiner says: "Sometimes at night the darkness and silence frightens me. Peace frightens me. I feel it's only a facade, hiding the face of hell".

The Vatican newspaper, L’Osservatore Romano condemned the film as a parody of Jesus’ second coming.  The film was banned in Catholic Spain until 1981 after the death of Franco.   The Vatican also disliked the film for its portrayal of Rome’s aristocracy which of course is very dynastically intertwined with the Church hierarchy. 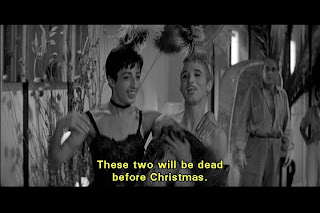 The famous sequence of bathing in the fountain was suggested by Giò Stajano (who became Maria in 1983) who had himself done the fountain thing, and had written novels about the café society scene in Rome, of which La Dolce Vita can be seen as a sequel.  His novels, of course, have a lot more gay characters.

When Marcello’s father visits and they go to a nightclub, he tells of his visit to Paris where he saw a stripper who revealed herself to be a man.  Probably he had been to Le Carousel, but it is not named.