Produced by Christine Vachon
Directed by Nigel Finch
Script by Rikki Beadle Blair, a fictionalization from the book by Martin Duberman
99 mins 1995 BBC 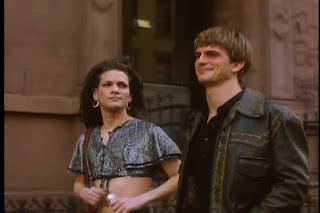 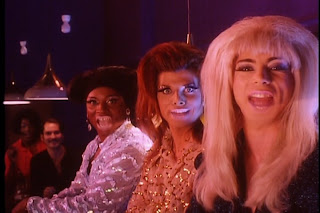 In 1969, Matty Dean arrives in New York City from somewhere in the midwest. He quickly falls in with a group of drag queens going to the Stonewall tavern. When La Miranda is harassed during a police raid he stands up for her and is beaten. They are arrested. Bostonia, a drag mother to the Stonewall queens, bails them out. Bostonia is also the lover of Vinnie, the closeted mafioso manager of the Stonewall. Matty also attends meetings of the Mattachine Society, where he becomes the lover of Ethan, a writer. Hector, La Miranda’s male persona, is called for military induction. She reports en femme, but is terrified when she is sent to a psychiatrist for evaluation. Matty wears her clothes and goes in her place. He gets her declared as ‘sexual deviant’. Vinnie arranges an appointment with a sex change doctor for Bostonia, apparently thinking that this will okay their relationship in the eyes of the straight world. She refuses: “I’m a chick with a dick who ain’t done with her dick yet”. Ethan and Matty go on the Mattachine Society demonstration at Independence Hall in Philadelphia. Then they go to the gay resort of Fire Island for a few days, where at a gay dance, man are not allowed to dance face to face, and on the beach police check that swimming costumes are not too skimpy. Matty prefers La Miranda’s defiance over Ethan’s acceptance of the system, and goes back to her. After watching Judy Garland’s death on television, Vinnie takes Bostonia out in public for the first time. The next morning, after telling her that he loves her, he shoots himself. The next night there is another raid at the Stonewall Inn, and after taunting, La Miranda hits back at a cop. The riot starts.

1996 L.A. Outfest - Grand Jury Award Honorable Mention - Outstanding Screenwriting - Rikki Beadle Blair
Rikki Beadle Blair turned the filmscript into a play, and it was premiered at the Edinburgh Fesival in 2007.

Nigel Finch (1949 – 1995) was a BBC producer/director. He had made previous programs about such queer topics as the Chelsea Hotel, Robert Mapplethorp, Kenneth Anger, Yukio Mishima. He was suffering from AIDS as he made Stonewall. He died shortly after its completion.

Rikki Beadle-Blair (1961 – ) is a Briton of Jamaican descent. He is an openly gay actor /singer /writer /producer /director. He adapted Boy George’s autobiography, and did a documentary on homophobia on BBC Radio 4. 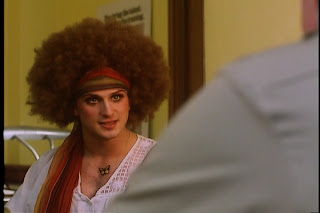 Martin Duberman (1930 – ) was a history professor at the City University of New York. He published the first book-length history of Stonewall in 1993.

Frederick Weller (1966 – ) is a cousin of actor Peter Weller. He can be seen in episodes of Law and Order. He is apparently heterosexual.

Guillermo Diaz (1971 – )(La Miranda) is an openly gay actor. He has played gay and straight parts. Stonewall is his only drag role.

Duane Boutte (Bostonia) has been in 7 films. Stonewall is his only drag role.

Dwight Ewell (Helen Wheels) has been in 31 films. Stonewall is his only drag role.

Matthew Faber (Mizz Moxie) has been in 23 films. Stonewall is his only drag role.

Michael McElroy (Princess Ernestine) has been in 7 films. Stonewall is his only drag role.

Vince Cupone (1972 - )(Jose/Carmilia) is a stunts person. He has also acted in 30 films. Stonewall is his only drag role.

Steven Wishnoff (1959 – ) (Lucy Tania) has been in 3 films, and played one of the prisoners in the television series Oz. He is an Emmy nominated producer. He played Albin/Zaza in the stage version of La Cage aux Folles, and has played other drag roles.

The Diva chorus, Candis Cayne, David Drumgold and Sherry Vine were well-known drag performers in New York. Candis Cayne, of course, started transition shortly after this film, and is now a woman.

Queen Allyson Allante, who with other actual participants in the real riot, is briefly interviewed during the opening credits, is transgender. She is ignored in both Martin Duberman’s and David Carter’s books on Stonewall.

Most accounts say that the first return blow was from a trans man (Stormé DeLarverie). There are no trans men in the film.

It is sometimes assumed that La Miranda is (very loosely) based on Sylvia Rivera. Guillermo Diaz, 24 when he made the film, looks too old to be the 18-year-old that Sylvia was in 1969. And where is the character based on Marsha Johnson? 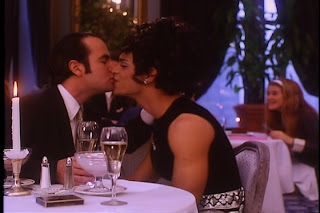 In fact, all the persons in the film (except Judy Garland, and the testimonials) are fictional. This avoidance of the real persons in the history is the aspect that is most criticized.

The Diva chorus which lip-synchs to songs by the Shangri-Las and others are in effect a Greek Chorus commenting on the action.

Like Tales of the City, 1993, US film/television was not interested in filming the story, and a British team stepped in.

Nigel Finch had never been to the United States before making this film.

Rikki Beadle-Blair was criticized during the making of the film: “No one's going to want to see a drag queen having sex -- that's a freak show, a bad example for the youth of America.” However he and Finch stood their ground.

Blair found problems in that the alternate accounts of Stonewall disagree. See for example the two major books by Duberman and Carter which disagree significantly. He partially resolved this by having La Miranda say at the beginning and at the end of the film that this was her Stonewall, her memory of events. This partially forestalls criticism about the facts, but does not explain how she knew about events where she was not present.

The characters in the film are to some extent composites of different people; others are archetypes to tell the story. Time is also collapsed. Some of the events with the Mattachine Society actually took place earlier in the 1960s, not in 1969.

As in To Wong Foo, Thanks for Everything! Julie Newmar, 1995 and Transamerica, 2005, the major drag roles go to cisgendered actors and the real drag performers/transgendered actors get only the small parts.

Jack Nichols, real life lover of drag star Logan Carter, was so negative about the film that he (wrongly) doubted that Nigel Finch was even gay.

Sylvia Rivera, a major real-life participant at the riots, demonstrated against the film at its New York premiere. 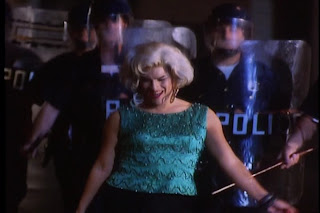 The film is annoying to some of those who want it to be a documentary, and to follow the known facts detail-by-detail. It is however a work of art, using composites, archetypes, time compression and a Greek chorus. These techniques are used in many films about historical events.

The film does re-assert the importance of transgendered persons at the riot. Transgender activists have rightly been aggravated by the efforts of some gays and lesbians to write the transgendered out of the history of Stonewall. Here a lesbian producer, a gay director and a gay writer put the transgendered back at the centre of the story.

Frederick Weller can currently be seen on the USA Network series "In Plain Sight".

Steven Wishnoff here. I played "Lucy Tania" in the movie. The gorgeous blonde in the picture above (looking a little Mariyln) is my dear friend James Palacio who also happened to play my cell mate on OZ for the 5 seasons we were with that show.

Here's some trivia for you - Nigel passed away before the movie was finished - the final version you all see varies quite a bit from his final cut of the movie. I have some of it -

Either way - it's nice to know there are still fans out there.

I've been looking for a copy just to see it again. Activists today protesting this latest film generally don't know about it or the criticism from many sides back then. So I'm withholding judgement until I see it. In many ways, Stonewall is a collection of fictions. I've read many first person accounts & counter narratives to each. Even Duberman leaves lots out, and he's a historian, especially with Sylvia. Still, I credit him with bringing her story back, even though he erases parts of her.