Mick Jagger and the Rolling Stones.

Cisgendered heterosexual that he is, the younger Mick Jagger did have an ambiance of being androgynous, although not to a degree that compared at all with real gender variance. Androgyny for the cisgendered. Steven Simels in his Gender Chameleons: Androgyny in Rock ‘n Roll, 1985, wrote of Jagger “Hipless and emaciated, possessing lips of such astonishing lasciviousness, that when you put him on stage he resembles nothing so much as some weird mixture of both human sex organs.”

However we must say that the major items below were recorded 1966-70. Very few other rock bands flirted with androgyny until the coming of Glam rock in 1972. 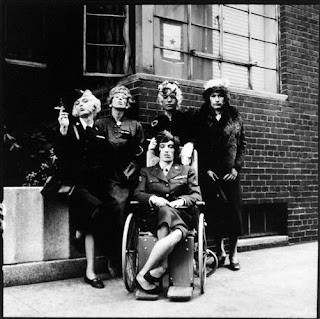 In 1966 of the band dressed as World War II army nurses for the photograph that accompanied the single, 'Have You Seen Your Mother Baby, Standing in the Shadow?'.

In 1967 We Love You, one of the very earliest videos, made in the wake of Mick Jagger's trial for marijuana possession, has Jagger, in the dock, dressed as Oscar Wilde and Marianne Faithful as Alfred Lord Douglas.

The Stone's single, 'Honky Tonk Women', 1969, has been commented on by different writers as being about a drag queen: 'a gin-soaked barroom queen in Memphis' heaves him 'right across her shoulder ... she blew my nose and then 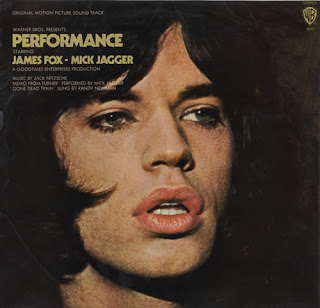 she blew my mind'.

The word androgyny has often been used about the film Performance, 1970, which has Jagger as Turner, a retired rock-and-roll singer who initiates Chas, an on-the-lam gangster into androgyny and fusions of gender and identity. Well, the trailer intimates that. At the end the identities of Turner and Chas have become confused. Which one has been killed? Which one is taken away by the gangsters? This is not really androgyny (man-woman): it is more andrander (man-man). But then there is that bit where Chas is in bed with one of Turner’s women, and with a bit of tricky editing, you think for a moment that it is Turner himself rather than the woman.


Steve J. Spears' stage play, The Elocution of Benjamin Franklin, about a transvestite speech-therapist, which was first performed in 1977, uses both the Rolling Stones' song You Can't Always Get What You Want and Mick Jagger's image as part of the ambience.

The film, Running out of Luck, 1986, features Jagger as himself recording his first solo album in Rio de Janerio when he is kidnapped by a gang of transvestites. This film is so obscure that I could not find either a suitable photograph or clip.
Posted by Zagria at 11:01