Richard Wayne Penniman was a Rock-and-Roll singer/pianist and preacher.

In his apprenticeship years, he had toured the southern US in a vaudeville show where he played in drag as Princess Lavonne, ‘the freak of the year’. 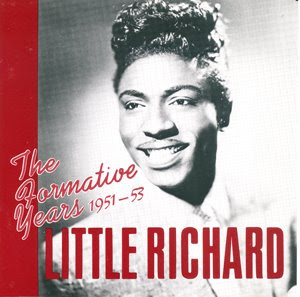 Later, as he became famous as Little Richard from 1955, he performed with make-up, flamboyance, high pitched squeals, extravagant clothing and pompadour hairstyle.

Little Richard was certainly out of line with the 1950s concept of masculinity. One of the pioneers of rock and roll, he was unique in purveying an androgynous image.

Two of his hit records have been taken to be about drag queens: bald-headed Sally, and Miss Molly who is addressed as ‘son’. The 18th-century mollies were of course transgendered.

Mama, papa told me 'Son, you better watch your step',
If'n your Papa's Mama had to watch my Papa's step ,
Good golly miss Molly, sure like to ball,
A-When you're rockin' and a rollin', can't hear your mama call.

Well, I saw uncle John with bald headed Sally,
He saw aunt Mary coming and he ducked back in the alley,
Oh baby, yes baby, woo baby, havin' me some fun tonight.

W.T Lhamon writes: “Traditional black folk figures scamper through this song in scandalous antics. Uncle John is a stock figure in black lore from the ‘John cycle’ of tales about a slave who outwits the authorities. On this level, the song’s Aunt Mary is a good wife … But ‘Aunt Mary’ is also gay argot for a possessive queen. So she operates on at least two levels, apparent nurturer and drag possessor. In any case, Uncle John in this song is ducking out on Aunt Mary’s authority, whatever she represents. It’s Long Tall sally, ‘built for speed,’ who ‘got everything that Uncle John need.’ But where did Sally come from? Nightmare to to every Aunt Mary, Sally is the newly noticed, old, subtraditional freak. Not only long, tall, and speedy, she’s ‘bald-headed.’ As such, she’s figuratively phallic, flashing in and out of alleys in the hand of Uncle John, that trickster. That is attractive enough in the male-bonding context of the studio where all this cropped up mutually among these men, but there is more. In the transvestite shows of Little Richard’s apprenticeship, baldheadedness was preparation for one’s wigs… Long Tall Sally, in addition to her other meanings, is therefore a transvestite fantasy figure slipping and and sliding through life’s niches. … A transsexual variant of Sambo, and just like this new rock form which her surfacing embodied at this mid-fifties moment of family breakdown, she represents whatever anyone wishes her to represent.”

Richard Penniman is also an ordained born-again Christian. As a reverend, he married Bruce Willis and Demi Moore.

He was one of the first seven inductees into the Rock and Roll Hall of Fame in 1986.