Wanda Tinasky was the pseudonym used by the writer of a series of letters sent to the Mendocino Commentary and the Anderson Valley Advertiser, both in northern California, between 1983 and 1988. Wanda is self-described as a bag lady living under a bridge. Her opinions on many topics were witty, irreverent and sometimes harsh.

Bruce Anderson, the editor of the AVA, was later struck, while reading Vineland, 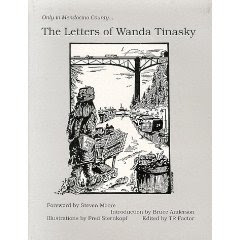 with the stylistic and biographical similarities to Thomas Pynchon (1937 - ), and published a book to that effect. The same thesis was taken up by Fred Gardner and TR Factor (alias Diane Kearney and C.O. Jones), who also published a book on the thesis.

The alternate opinion has been put forward by Don Foster, Shakespeare scholar and literary detective, that Wanda is in fact an obscure beat poet, Tom Hawkins (1927 – 1988) who killed his wife and committed suicide at the time of the last Tinasky letter. More matches of biographical details turned up, and his poetry is recycled in the letters.

*Not Diane Kearney, the HBS advocate.