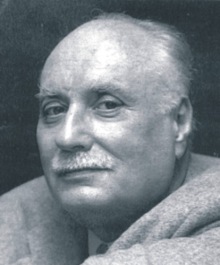 Elémire Zolla (1926 – 2002) was born in Turin to an Italian-French father who was a painter and an English mother who was a musician. He was raised in Paris and London, but then settled in Italy.

In 1956 he won the Strega Prize for his first novel, Minuetto all'inferno. He married a poet, Maria Spaziani, 1958, but they were divorced in 1960. From 1966 to 1978 he was Secretary of the Istituto Accademico di Roma and from 1970 to 1973 Director of the Istituto Ticinesi di Alti Studi in Lugano. In 1970 he wrote an introduction to the Italian version of Tolkein’s The Lord of the Rings. He was the long time director and editor of Conoscenza Religiosa, a leading Italian journal in religious studies. He taught Anglo-American and comparative literature at La Sapienza University in Rome and at the University of Genoa.

The Androgyne: Reconciliation of Male and Female, which was published first in English and only later in Italian, is an intriguing book that covers many of the aspects of the Androgyne in myth, but also features some items that readers may be puzzled about, such as decapitation and plunging into water.

Zolla proposes two paradigms of androgyny:
(1)
a) Suitors are slighted or a goddess is offended or mating is hindered, the hidden meaning possibly being that an esoteric use is made of sex;
b) A plunge is taken into transforming waters. Or contact is made with serpents. The currents of subtle inner energy may be alluded to in either case;
c) There follows a succession of switches in sex; one's self-reflection pivots on its axis of symmetry. In Tantric sex the two opposite currents are usually stimulated in turn;
d) The consequence is a loss of sight leading to the acquisition of spiritual or prophetic insight, or the granting of the gift of music, the mastery of rhythms. In the Narcissus myth the explicit discovery of the self-delusive quality of maya takes the place of the loss of sight. Tales such as Hermaphroditus, Teiresius and Narada fit into this paradigm, as does the Genesis tale of Joseph and Potiphar's wife, and the Buddhist tale where a chaste youth closes his ears to a woman's entreaties and she has him blinded out of spite.

(2)
a) A cosmic cavern or tree or anthill;
b) inside is concealed the androgyne, the Primal God, or the God who assumes the sex opposite to that of the worshipper;
c) violence of love blinds, bisects or beheads the androgyne;
d) The severed head or lost eyesight becomes a cause of trouble; a sacrifice has to be made;
e) Balance is restored, the androgyne made whole once more, the land healed.

His other books are: The Eclipse of the Intellectual

; a morphology of the American Indian, 1973. Archetypes: The Persistence of Unifying Patterns

The application of any of this to real-life trans persons is not at all obvious; nor if this is indeed androgyny, what should a person do who wishes to be androgynous.  Nor do I perceive any system in Zolla’s archetypes of Androgyny.  Surely by emphasizing different myths of androgyny, one could arrive at different archetypes.

Unlike Joseph Campbell or Mircea Eliade, Zolla’s approach is neither that of a scientist nor of a mythographer, but that of an artist.  You relate to his presentation or you do not.  But there is no dialectic or doxy that will accept or reject it.
Posted by Zagria at 22:45