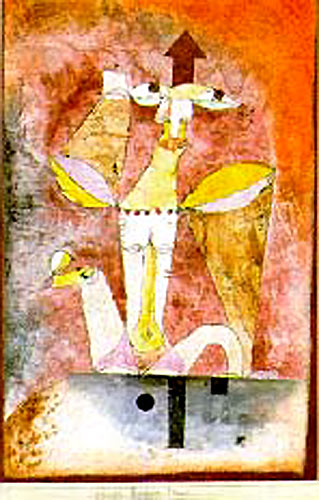 
Barbarian's Venus by Paul Klee (1879-1940) is one of the most "barbaric" Androgyne images of the era.  She is a Venus with a penis. Klee was not a member of the Surrealist circle, but sometimes exhibited with them. He was associated with Kandinsky and Marc in Munich in 1911 and 1912, then took from Cubism and Orphism the concept of fluctuating planes. Klee was thought by some to be an Alchemist when he discussed the Absolute, Nothingness, and the Ground of Being. His students at the Bauhaus (only half in jest) called him "Heavenly Father." He was one of the first modern artists to explore Androgyny in tribal art.


The painting is owned by The Norton Simon Museum in Pasadena, California, but is not currently on view.  They describe the painting:


This androgynous Venus, with her direct gaze confronting and challenging the viewer, displays both female and male organs, thereby engaging us by flaunting her dual and "barbaric" sexuality.