In urgent need of an apartment in Paris, Trelkovsky finds one on the rue de Pyrenees that was about to become vacant as the current tenant, Simone Choule, had thrown herself out of the window into the courtyard below. He visits Simone in the hospital ward where she is dying, and becomes acquainted with her friend Stella. 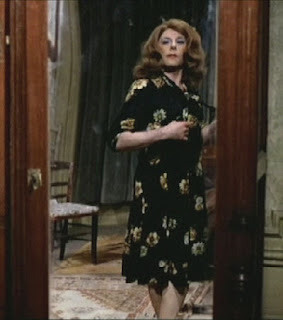 After being criticized by the neighbours for a flat-warming that was too noisy, Trelkovsky became more and more paranoid about the neighbours. Some stand in the toilet across the courtyard and stare at his window, there are knocks on his door but no-one is there. The neighbours organize a petition to evict a woman with an handicapped child; they fight with each other over noise.

The cafe owner across the street insists on always serving the hot chocolate and toast that Simone Choule had always had, and pushes Trelkovsky into smoking her brand of cigarettes. The landlord persuades him to wear slippers in the apartment as she had done. One morning he awakes to find his face made up in a feminine manner. For a while he plays along with the role, going out made up, buying a wig, a dress etc., shaving his legs and enjoying the normal pleasures of transvestity. Then one morning he awakes and finds one of his upper incisor teeth missing - as Simone Choule had.

The next time that he awakes he is dressed and made up, he sees a parade of people in costume in the courtyard suggesting a ritual sacrifice. He barricades himself in, and escapes the next morning in his regular male outfit. He stays with Stella. After being knocked down by a car, he is sedated by a doctor. The driver of the car, to make amends, drives him home: however the driver was one of the neighbours from the rue de Pyrenees.

The next morning, Trelkovsky, in full drag, jumps out of his window. Surviving, he struggles back to his room, only to be stabbed, and thrown out the window again.

He awoke in hospital, to find Stella calling him Simone, and a man who looks like himself looking on.

). But we could also categorize it with his occult films: Rosemary's Baby, Macbeth

The film is also a time loop. Time loop films, where the end is also the beginning, often have a trans or androgyny theme. A good example is Before the Rain

Like Polanski himself, Trelkovsky was a Pole in Paris who did not know how to do things.

Trelkovsky is given no first name in either the novel or the film.

The story fitted so well into Polanski’s oeuvre that the file critic Rebecca Bell-Metereau attributes details found in the novel - such as finding Simone's tooth behind the wardrobe - as Polanski's additions. The film suggests more strongly than the book does that Trelkovsky was imagining it.

Polanski, playing the lead role, is actually uncredited as an actor.

The film has no final credits.

(1973) (seen by Trelkovsky and Stella during a cinema visit). The cuts were restored in the 2004 Paramount DVD.

The film is not really in either French or English. No matter which audio language you choose on the DVD, the lips never properly match.

This is the last film made by Polanski while still persona grata in the US. Two years later he fled from a paedophile charge in California and has not been back since.


Transvestity in the films of Roman Polanski

This is hardly a theme in Polanski’s films. In Cul-de-Sac.1966, George (Donald Pleasence) is encouraged by his young wife (Francoise Dorleac) to put on a nightie and makeup. This is pretty minor.

In The Magic Christian, 1969, Polanski was the straight man to Yul Brynner’s drag performance.

The only real Polanski drag movie is this, The Tenant. Polanski cast himself as Trelkovsky, but we cannot assume anything about his gender identity from this. The protagonist being a Pole in Paris, who does not fit in, as was Polanski himself and also Topor, was enough reason for him to identify with the part. The themes other than the cross-dressing, especially the neighbour paranoia, are very Polanski.

However, despite Polanski using transvestity to tell a tale of madness and fear, and having little interest in real transvestites, there are moment that trans women will relate to. The days of not really knowing who you are, and that period when you do not quite pass and are the neighbours talking about you, especially when they stop and stare at you.