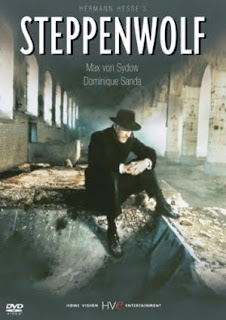 produced by Melvin Fisherman & Richard Herland.
Directed by Fred Haines
Script by Fred Haines based on the novel by Herman Hesse
106 minutes 1974

Harry Haller, a man devoted to the high culture of Goethe and Mozart but alienated by the shallow bourgeois pretence of admiring that culture, sees himself as having a second animalistic nature, a wolf of the steppes.  However he is in despair and on the verge of suicide when he encounters Hermine in a chance visit to a dance bar.  She offers him friendship and teaches him to value the little things in life, to dance and to take drugs.  From the start he notices that her features have a masculine aspect, and feels that she reminds him of his childhood friend Hermann.  He eventually fully falls in love with her at the costume ball where she is dressed as a man. She and Pablo, a jazz saxophonist, take Harry to a magic theatre where he is able to encounter some other of his myriad personalities.

Herman Hesse (1877 – 1962) was an influential German-Swiss novelist with interests in Buddhism and Jungianism.

Melvin Fishman produced only this film.  He was a student of Jung and Alchemy and wanted Steppenwolf to be the first Jungian Film.  The film was in pre-production for seven years as Fishman built up a relationship with the Hesse family to obtain the film rights.  He did lots of drugs and had a heart attack shortly after the film was finished.  Two years later another heart attack killed him.  He died with 20 Swiss Francs in his pocket, and no other money.

Richard Herland produced one television series and four films between 1964 and 1986.  He raised the money for Steppenwolf.

Peter Sprague, the major financier, was a scion of US industrial wealth who thought of himself as radical.

Fred Haines (1936 – 2008), from Los Angeles, fluent in French and German, did a degree in literature.  He met film director Joseph Strick and together they wrote the script of James Joyce’s Ulysses, 1967.  It was nominated for an Oscar for Best Adapted Screenplay.  He was a co-writer of Strick’s Tropic of Cancer, but took his name from the credits after a disagreement.  Steppenwolf in the only film that he directed.

Max von Sydow has been in over 140 films.  He is one of Sweden’s most distinguished actors.  He has played both God and the Devil.

Dominique Sanda is a French actress who was especially known for her roles in Italian films.  She has been in 54 films.

Timothy Leary, on the run from prison, was considered for the part of Harry Haller, but he gave two acid tabs to Sprague who then had a bad trip.

Conrad Rooks, a heir to the Avon cosmetics fortune, who had made the druggie film Chappaqua, was also courting the Hesse family for Steppenwolf, but ended up with Siddhartha instead.

While the film was made in English, none of the actors are native English speakers.

Peter Sprague, the major financier ended up owning the rights.  He put the film on a shelf for two years.

The colours were wrong when the prints were made.

The special effects were cutting edge for 1974.

Mati Klarwein (1932 – 2002), who did the album covers for Santana’s Abraxas and Miles Davis’ Bitches Brew, painted the images in the corridors of the Magic Theatre.

The Czech artist, Jaroslav Bradac , did the animated sequence.

Decades earlier than the Terminator films and The Matrix, Steppenwolf includes a sequence where humans are fighting a war against the machines.

“…it seems to me that of all my books Steppenwolf is the one that was more often and more violently misunderstood than any other, and frequently it is actually the affirmative and enthusiastic readers, rather than those who rejected the book, who have reacted to it oddly…”–Hermann Hesse in the 1961 prologue to Steppenwolf.

I was one of very few people who saw the film on the big screen.

Do we have one personality? Or is it an illusion?  Early in the book, Harry sees himself as having two personalities: the spiritual, high-culture snob; and the wolf from the steppes who loathes the bourgeoisie.

When he enters the Magic Theatre the illusion, his fake personality are fractured and he finds that he has thousands of personalities.  Significantly he does not have any female personalities, or perhaps he merely fails to acknowledge them.

There is a suggestion in the text that somehow Hermine is not real - as such she would be Harry's Anima (Hesse was influenced by Carl Jung at the time he wrote the book).  This idea is supported by the fact that 'Hermine' is the feminine form of the Hesse’s first name.  As Harry is not able to recognize his feminine selves, his anima is projected outwards. and takes the form of an independent person.   The ‘fact’ that he maybe/maybe not kills Hermine at the end would constitute a further refusal to accept his inner woman.